JOY comes in the morning with Tommy and Brooke

Tommy and Brooke have been a morning show team since December 2004. From the moment they first went on the air together, they knew their mission. “To encourage others to encourage others”. They’ve done that at both their previous stations together, WCSG and Star, and will continue that mission here at Joy99! Their path has led them here “for such a time as this” and they want God to use them in even more powerful ways. From Cookin’ With Brooke to Little Giggles to the Best Day Ever, they want your family to be encouraged and to enjoy listening. They promise to keep things safe for your kiddos’ ears. They also want their show to be about you! What are you dealing with right now? How can they pray for you? How can they encourage you? Who in your home is celebrating what? Want to hear your favorite song? Let us know! Call to our show: 616-931-9936 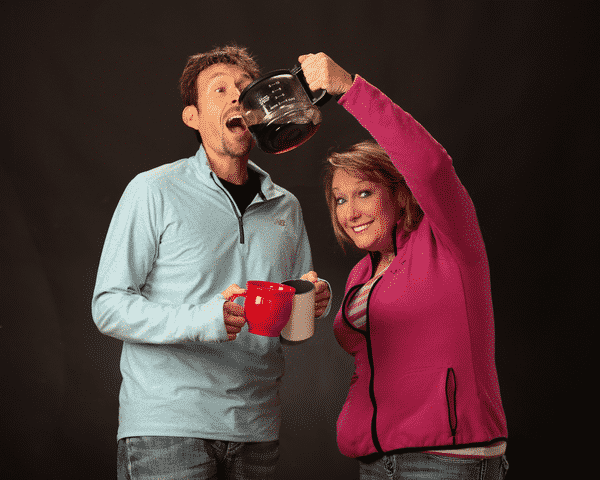 As Heard On Tommy and Brooke

3 Things To Remember About Prayer

Brooke’s Broccoli Salad For some reason, I was craving this the other day, so I looked up a...

Will you please share the career path you two have taken together that's brought you to where you are now?

What are the personality dynamics that have kept you successful as a team for so long?

We have many similarities in our personalities. But, because we have worked together for so long, we know when to push those “buttons” that bring out our differences, without making it sound like two kids arguing in the backseat. We are both fans of family and pretty conservative. So when an issue comes up, we usually are on the same side. However, like today, I (Brooke) had to give Tommy a hard time for not buying Girl Scout cookies from a little girl that came to his door. He’s a cheapskate and probably broke the little angel’s heart.

Tommy, what impresses you most about Brooke as an on-air personality?

Brooke is real. Her emotions aren’t contrived. She’s a mom, and it comes through clearly to our audience. She’s always family first. Her son has been in the hospital so many times throughout our 14 years together. I just know if she gets a call that his lung’s collapsed (it’s happened 12 times), that she’s out the door. Forget the show. So many times, we’ll get calls from moms who are by their kiddo’s hospital bed needing comfort and prayer, compassion and empathy. No one can help them better than she can at that moment.

Brooke, what is something you have to constantly remember about Tommy when relating to him on-air?

I really think it’s important to want your listeners to like your co-host. So many shows are so negative and co-hosts beat each other up on the air. I feel like a co-host should try to get the audience to love their co-host and think they’d be fun to hang out with! Beyond that, I trust him. I know he knows when the ‘out’ is and when to hit the button.

In order to work together so well for so long, communication is obviously key. What was one of your greatest communication breakthroughs with each other as it pertained to doing your job the best?

What is means to truly be on the same page. At our last gig, it seemed at times like they were trying to divide us and pit us against each other-even make us compete against each other for clients. We had to learn to keep the lines of communication open between us and bind together for our show and our ‘Tommy and Brooke’ brand. It was actually very damaging to our relationship for a time, which I believe affected our show on-air. I think we are way closer now than we were in that environment. When you’re told by your bosses to not be so nice to each other on the air and to ‘fight’ more, sometimes you can start to feel bad when this happens on the air. You can start taking those conflicts personally and feelings get hurt.

What was the biggest eye-opener for you when you left Christian radio for mainstream radio in 2007?

That some of our former listeners and even co-workers thought that we’d left Christian radio for more money and fame. The amount of hurtful emails we received from Christians that said we couldn’t possibly minister to that audience. I mean, isn’t that what we’re called to do? Mark 2:17, Jesus says, “it’s not the healthy that need a doctor.” Not that we’re doctors by any stretch, but we had the medicine that those listeners needed and we believed we were called as disciples to GO!

Can you recall a moment at Star 105.7-maybe an interview-that was most opposite anything you'd likely experience at Joy99?

We had the incredible honor to go to the American Idol Finale as Paula Abdul’s guest two years in a row. Not only have we built a friendship with her, but have learned how misunderstood she was and what a genuine person she is. If you ever watched American Idol, you noticed how Simon always seemed to make Paula look stupid and scattered. She explained to us one of those instances was because of a behind-the-scenes rehearsal. She had taken notes on the song one of the contestants sang because she always wanted to give them genuine feedback. Well, something happened between rehearsal and the show and the contestant changed songs. When it was time for Paula to give her comments she mentioned the song from rehearsal and Simon went off about how Paula got the song wrong and must not have even been listening. She looked silly and couldn’t explain what had happened. She was the only one that seemed to truly care about the contestants and their career.

We’ve always purposefully made the listener the star of our show, not us. Our show’s mission is, (was and always will be) to encourage others to encourage others. That translates to both audiences. We actually have been so surprised at the number of secular listeners who have followed us to this Christian station. Many, many of them saying they’ve never listened to Christian music before. I mean, this is West Michigan and there are at least three Christian stations; and yet, they are brand-new to Christian music. They don’t know the songs or the artists. We are the only connection they have and they are listening and loving it! People want to be encouraged. They want real people they can relate to and now our listeners at Star 105.7 get songs and artists that do that for them as well. While we aren’t playing Bruno Mars or Adele, they’re still listening! One Star 105.7 listener wrote us saying, “It is so good to hear Tommy and Brooke back together again. The unexpected thing…I like the music. It turned out to be a great way to start my day. Thank you for bringing love and light to West Michigan.” It’s been overwhelmingly positive!

Not really, because the thing is, we’ve been real the whole time. Real when we were at WCSG, real when we were at Star 105.7. And we’re the same real people here on JQ99.3. And people want authenticity. Life as a Christian isn’t all perfect, all the time. We’ve had struggles just like our audience has. We are all living in a world with abusive relationships, chronically-ill children, divorce, dying parents, deployed family members, and way worse stuff. Christian radio can’t ignore those uncomfortable topics and ‘play another song’ that they hope will cover it so they don’t have to. And secular stations can’t focus on those topics as they happen in Hollywood without giving hope to their listeners that, even though this life can be sucky, we can have peace. JOY’s lane is right down the middle so it’s a great fit for us. People want to be encouraged. They want real people they can relate to and now our listeners at Star 105.7 get songs and artists that do that for them as well. While we aren’t playing Bruno Mars or Adele, they’re still listening! One Star 105.7 listener wrote us saying, “It is so good to hear Tommy and Brooke back together again. The unexpected thing…I like the music. It turned out to be a great way to start my day. Thank you for bringing love and light to West Michigan.” It’s been overwhelmingly positive!

Grand Rapids is one of only a small handful of markets that contain two local, Mediabase/Billboard-reporting Christian radio stations. Surely, the competition drives both stations to be better. How do you discern listeners in your market benefit most from this competition?

There are actually more than just two of us playing Christian music and there’s definitely room for all of us. We offer different personalities and different ministry styles, even if some of the songs are the same. We’re better when we focus on what we do best and get out of the way of what God wants to do through us rather than to try to combat what another radio station is doing. Who are we ultimately serving if we do that?