Pro Football Hall Of Famer Shares The Gospel At Induction 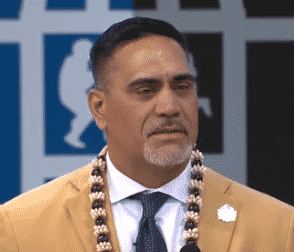 Kevin was quick to share about his faith. Less than a minute into his speech, he proclaimed, “I am a born again believer to the resurrection and blood of Jesus Christ, and I proudly and humbly recognize that without God’s grace and His blessings, I would not be here tonight.”

Mawae mentioned his brother, John, was tragically killed in an alcohol-related car accident on May 5, 1996, and just weeks later he learned his wife was pregnant with their first child, a son, Kirkland.

“Those two moments changed my life, and the direction and purpose of my life forever,” Mawae said. “With that extreme sorrow followed by great joy, my focus turned to faith as I learned of the redemptive power of Jesus Christ and the purposeful living in His name. Whether it be through encouragement, wisdom or resources, I learned that God can use one person to change the lives of hundreds and even thousands.

“My journey to football became a platform for the purpose of changing lives and sharing the Gospel.

After his brother’s death, Mawae began to explore faith in God and try to understand who Jesus. He began reading the Bible, working through the New Testament, and attending team Bible studies, and he eventually gave his life to Christ.