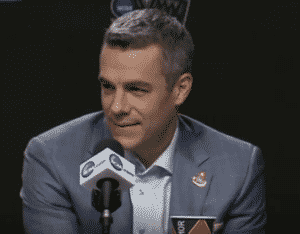 This week, the Virginia Cavaliers won the national college basketball championship, and their theme song was not your typical “rock anthem”, it was a song we play on JOY99!

After the game, Head Coach Tony Bennett thanked God, among others, for the win.  And also said he used the song, “Hills and Valleys” by Tauren Wells to inspire his team before the game.  He said he wanted the players to know they’re never alone in the hills or valleys. Pretty cool, huh?

Before coaching, Tony considered becoming a Pastor. We think he’s using his platform beautifully to reach people in a truly inspiring way! What are you doing with your platform?