After a woman hijacked and subsequently crashed Rayden Jones’ car, the delivery driver was suddenly going to be left without a mode of transportation to do his job.  Then, suddenly, a Good Samaritan stepped in to save the day. A man named Kevin Lindke had been driving home from work when he saw a swerving car take a wrong ramp onto a freeway. Lindke dialed 911 as he followed the car and described the situation to police dispatchers. The woman who stole the automobile eventually smashed into another vehicle before abandoning the totally-wrecked car on the side of the road. Later, when he learned from law enforcement officials that the car had belonged to a hard-working pizza delivery driver, he was moved to donate his minivan to Rayden, rather than selling it, as he had originally planned. 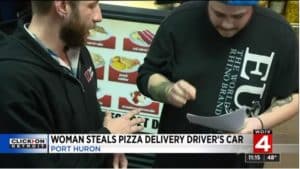