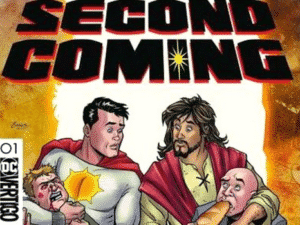 A few weeks ago, we shared a story with you about a Comic book series called, “Second Coming” being published about Jesus as a Superhero.  At first glance, it sounded pretty cool! But then we dug a little deeper, and it didn’t sound right at all!

A plan by DC Comics to produce a series about Jesus as a superhero is being canceled. More than 220,000 people signed a petition asking DC to cancel the series claiming it to be heresy. The series “Second Coming” was expected to team Christ with Sun-Man on a most holy mission from God to learn what it takes to be a true Messiah. Sun-Man was also going to try and “fix” all of the things that Jesus did not get right when He was on earth. (Um…yeah that’s not right!) The first issue was expected to be released on March 6th.