Sooners’ QB Jalen Hurts Shares His Faith-Filled Journey
Oklahoma quarterback Jalen Hurts didn’t want to take personal credit for the Sooners’ Big 12 championship season Saturday. Instead, he thanked those around him – his teammates and coaches – and thanked God. “This is not about me,” he said during a postgame news conference after Oklahoma defeated Baylor in overtime, 30-23. The next day, Oklahoma was selected as one of the four teams for the College Football Playoff. Hurts is known for his faith. His profile picture includes a graphic reading, “Be who God called you to be.” 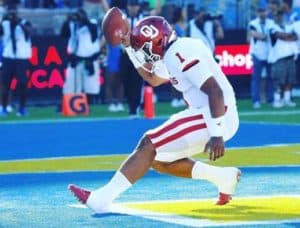